The inventory lies at the heart of "old school" play, and especially games that like to focus on the minutae of dungeon crawling and problem solving. "What do you have?" and "what can you bring?" are some of the most basic building blocks of interesting decisions in that space.
For the type of game I run, I think that the party's pockets deserve to actually be fun and interactive, and add to play rather than impede it. With that goal in mind, come see if you agree with my solution.

A Burden at the Table

When I first started planning my Stained Fortress campaign, one of the very first questions that I asked - and one of the last ones I answered - was how to handle the inventory. I knew right away that I wanted it to matter, but I wasn't quite sure in which direction to take it. And there are quite a few options available out there.

Of course, like with all matters of faith, the first place I looked was The Good Book. And within, the (optional) rule for encumbrance is as follows:

A person can only carry a limited amount of weight before being overloaded and unable to move. In D&D rules, weight is measured in coins (en), rather than pounds, since all coin types are equal in weight and coins are the most common of treasures. Ten coins weigh one pound. Encumbrance (a combination of weight and bulk) will affect movement rates for characters. Characters' movement rates are slowed by carrying excessive amounts of treasure and equipment and by the different types of armor they wear, as shown on the following Character Movement table. The encumbrances of the types of armor do not exactly match the coin weights, but when the encumbrance of the character's weapons, shield and gear are added, the encumbrances are about equal to these weights. The DM will need to determine the encumbrance of other items that characters might want to carry, such as a wounded character, and should compare this to the total coin weights given on the table to determine the characters' movement rates. Characters carrying more than 1600 coins of weight are overloaded and unable to move!

Inspired by the old word, a coin weight-based system was my first consideration. After much soul searching and deliberation, though, I regretfully abandoned the idea; as delightfully retro and weirdly intuitive it is to weigh something by how much treasure space it's costing you, the required math was just entirely too much of a hassle.

This left me with two avenues: very abstracted/handwave-y inventory, or something using slots. While some of the looser tag-based systems I've seen had intrigued me, they were just too simplistic, so I ended up going with nice, clear, easily tracked slots.

The next question was just how many slots there should be, and I eventually found the answer in the quote three paragraphs ago. That's right - for all my tearful goodbyes, the 1.6 oz currency never left my mind. I wasn't particularly interested in the unrealism of having such huge coins, nor the scientific accuracy of how quickly a human can travel under a certain burden, so "1600 AA Batteries" seemed as good of a place as any to start.

Through some math that I sadly don't have written down, I figured out the coin weight of the "average thing", divided the electric 1600 by that average, and arrived at the healthy, familiar 18.

Next, I assembled my own item list, writing down item weights in slots. Larger items may take up multiple slots, while smaller items of the same type can be put together in one slot, with the exact amount varying per item. Coins have a weight too, of course... except that, for the sake of practicality and easy math, adventurers can carry 100 coins per slot. Yes, that means that my coins are slightly lighter than a coin weight each. I await your hatemail.

I also changed up the prices of some items. Nothing too crazy, the most obvious difference being that the richest level 1 characters could maybe start with chainmail armor, and little else if they did so. This minor alteration served to both give completely new parties the opportunity for an early power spike (your typical fighter is still going to be wearing plate way before they hit level 2), and it created a bit more camaraderie at the table, where the more experienced adventurers will usually lend a few hundred silver pieces to their freshly-created companions. But I digress.

Here's how the current inelegant-but-practical inventory looks on the campaign's character sheets:

Astute readers will have noticed that there's slightly more here than a set of boxes to write item names in, so let's break down the individual components.

Our 18 slots have been handily organized into 5 categories:

You might be wondering why this system tracks which containers equipment is in, and the answer is - now it matters in the game! As adventurers get harmed in various exciting ways, their more fragile items might also be damaged. Knowing where those items are held, and in what kind of container, is a nice little extra information to have to deduce the outcome of these mishaps.
Making the containers concretely tracked also makes them gameable. Packing order has been an interesting question at my table: What's important enough to put in your quick slots? What are you willing to lose if you need to discard your backpack to make a quick getaway? Do you really want to put that strange icky substance into the same container as your precious spellbook?
Different container types opens up the door to Magic Containers. Things like quick slot-expanding backpacks, waterproof satchels, extradimensional pouches and more have been enjoyed by players throughout the campaign. And I don't need to tell you that magic containers and magic items can interact in fun ways.
The most unusual thing here, however, are the two handsome polygons at the bottom. 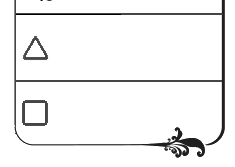 The intentionally imprecise capacity of slots becomes burdensome when you have many comparatively tiny objects such as loose notes, mysterious keys, or your friend's teeth. While it should be logically possible to have more than one item of a given type in a slot, allowing it without question would defeat the purpose of slots and return us to the hell of tracking item weights.
So, with Triangle and Square, you can dedicate up to two of your slots to being "A Bunch Of Small Stuff" slots. Simply jot down the respective symbol in that slot, and then use the spacious boxes below to write the actual contents of that slot. Now we've made miscellaneous item storage an interesting decision - since you can only have two slots for all your tiny easily-lost stuff, you once again start thinking about where to place these slots, and what to hold in them.
This might all be a bit tricky to comprehend, so here's a crude example:
This is not a perfect system, and I don't expect it to be ideal for anything that isn't my specific game. Even as I write this post, I've noticed that it might have been better for the inventory to be ordered Pouch > Satchel > Backpack, since that'd be a logical order for how accessible the different slots are. Similarly, the system is simple and loose enough that you still need to make rulings on the spot - do I allow players to store a full pouch within a backpack? Can two innately connected item types, such as a map and mapping tools, be stored in one slot? Can players hold more empty bottles in a slot than filled ones? (I'd say yes, yes and maybe.) This isn't something I'd want to address with more rules, since I'd rather deal with judgement calls in the moment than fill a page with special rules exceptions.
Whether or not I'll change it, though, what matters is that it works; my players easily kept track of their possessions without the process becoming burdensome to gameplay, and many memorable moments arose. From tossing satchels full of oil flasks to slashed backpacks spilling ball bearings all over the chamber, having these little extra details inspired players to think about their inventories as real and interactive rather than Hammerspace, and the campaign was richer for it.
transmission recieved 2/21/2022

Show 5 Show All
Powered by